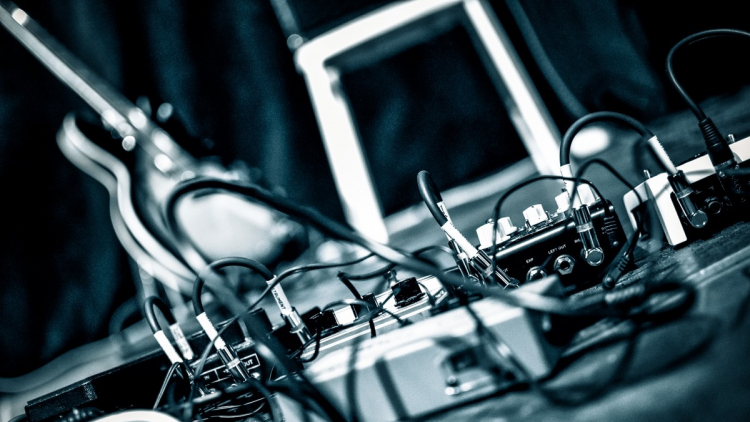 Hybrid Sessions is a new monthly series at Kampus Hybernská, the next step after last year’s Sólové series in Skautský Institut. We will feature an improvised duo set with two musicians coming from different backgrounds to form a new constellation. Afterwards, we will host a jam session open to all musicians, regardless of background. We want to create an open environment where musicians feel free to be creative in the moment, nothing is predetermined and the only expectation is a high level of presence. A basic back line will be provided.

Mikuláš Mrva is a Czech experimental musician, composer and programmer born in Prague. He studied Logic in Prague and Creative Sound and Media Technology in Bath, UK.
He plays electric bass, saz and live electronics in Stratocluster, Mušhuššu and Michael Jackson Pollock.

Jan Jirucha was born in Prague in 1982. He comes from a family of musicians and has played the euphonium and the trombone since he was six. In the autumn of 1997 he began to study trombone playing with Bedřich Beránek at Jaroslav Ježek Conservatory in Prague. In 2003 he went on to study at Jaroslav Ježek Higher Specialized School under the tutelage of legendary Czech trombone player, Svatopluk Košvanec. In 2008 Jirucha began to study at the Academy of Music in Katowice, Poland, where – besides trombone playing – he focused on orchestral composition and arrangement under the tutelage of the internationally acclaimed jazz big band personality, Ed Partyka. In the spring of 2009 he went on tour with the European Jazz Orchestra (international project gathering talented young jazz musicians under 30 years ) conducted by Peter Herbolzheimer. Since 2010 Jan Jirucha has been teaching jazz trombone at Janáček Academy of Music and Perfoming Arts in Brno. In 2012 Jirucha won the „Best Jazz Composition Award“ for his long piece, Preludium for Jazz Orchestra. This prize is regularly awarded by the prestigious Bohemia Jazz Fest in cooperation with Ochranný svaz autorský (OSA). In 2014 he conducted Euroradio Jazz Orchestra which also played some of his compositions. Two years later, the album „Concept Art Orchestra – The Prague Six“, where he contributed as lead trombone player and composer, won a significant Czech award „Anděl“ for the best Jazz and Blues album 2016. In January 2018, he cofounded Jazz Dock Orchestra which performs in the well known Prague club Jazz Dock each third monday.