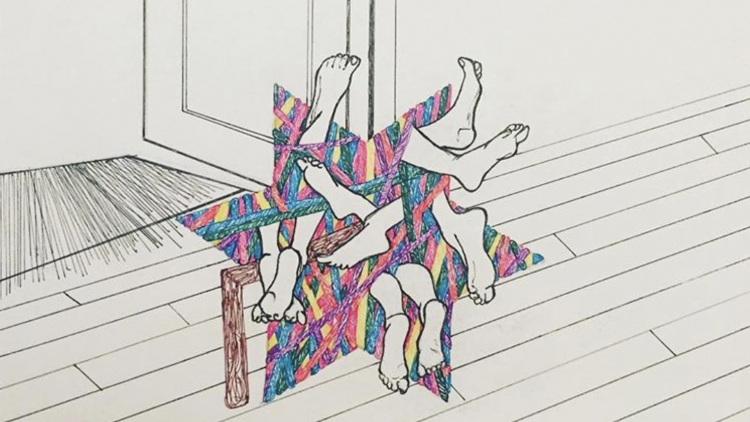 Svetlana Grishina (b. 1989) is a London-based artist, graduate of the Ruskin School of Drawing and Fine Art, Oxford University (BA 2011, MA 2017). She has exhibited all across Europe in various institutions and galleries including Tate Britain, Griffin Gallery, Fitzrovia Gallery and Camden Image Gallery in London, the State Darwin Museum, Overcoat Gallery and the botanical gardens in Moscow, st Catherine’s college in Oxford. Her work has been acquired by various private and institutional collections including Triumph Gallery, Art 4 Museum, Ovcharenko Gallery and Art Fazenda foundation.

Odradek is a fictional character from a 1919 short story by Frank Kafka ‘The cares of a family man’.  He is an inorganic object/creature described by Kafka as a “star-shaped spool of thread with a wooden crossbar sticking out of the middle of the star and another small rod attached to it at a right angle”. Odradek has some relation to the human but is also distinguished from it. He can laugh and he can talk and he has some sense of belonging to the house he inhabits, but he is also capable of spontaneously disappearing and the author suggests that he might be immortal. Odradek has caused an interpretative frenzy amongst literary theorists – Walter Benjamin, Theodore Adorno, Willi Goetschel, Samuel Rammelmeier, Judith Butler and Slavoj Zizek among others have had a go at trying to interpret what Odradek signifies and means.